Cultural Citizenship: an Integrative Agenda for a Transdisciplinary Debate 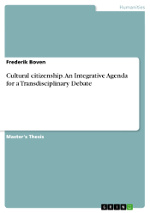 The starting point for this thesis is a problem situation in the Netherlands: doubts have been raised as to whether ‘culture’ in the Netherlands contributes in the right way and degree to the functioning of citizens. This situation is described as a problem of ‘cultural citizenship’: an ‘essentially contested’ concept that points to some interaction between culture and citizenship, but leaves it open to interpretation what this interaction is. This flexibility allows the concept to open up a transdisciplinary debate that involves various fields and paradigms. The thesis aims to offer a research agenda for such a debate. An integrative research agenda on cultural citizenship is formulated in two steps.

First, seven authors from various fields and paradigms are discussed: the Dutch Council for Culture, Renato Rosaldo, Nick Stevenson, Paul Scheffer, Will Kymlicka, Jeffrey Alexander and Paul Ricoeur. For each of these authors research questions are formulated that reflect their work, 78 in total. Second, the research questions are reworked in a more structured and shorter list of 12 questions with sub questions.

The final result is a single normative question that integrates insights from all authors and that identifies three normative principles that should guide interventions in the Dutch problem situation: (1) make culture equally accessible to all citizens; (2) protect the richness and viability of culture; (3) balance unity and diversity.